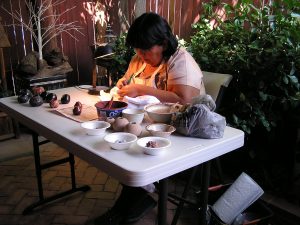 The sgraffito two-tone pots created by Candelaria Suazo of Santa Clara Pueblo, some of them detailed tiny miniatures less than two square inches in size, inspire fascination in collections of Native American art.

Sgraffito, Italian for “scratched,” is exactly as described.  Layers of different colors are applied in the process of making the pot and after drying are then scratched off to create a contrasting image in the under color.  Some of her bowls emerge from firing having both black and reddish-brown coloration, Smith says.

“The contrast between the polished and painted and etched surfaces, especially the cream slip over red, is very pleasing visually,” Smith says of the prize-winning artist’s fine work.

First trained in traditional pottery making by her mother, Santanita Suazo, Suazo began hand-coiling pots from clay found on Santa Clara Pueblo and firing them in a traditional outdoor fire pit in 1987.  She also has been influenced by many other relatives including Margie Naranjo, Martha Huangooah, Mae Tapia, Shirley Duran, Delores Curran and Geri Naranjo, according to the Wheelwright Museum of the American Indian.

“Candelaria is a special person to me,” Smith says.  “She has kindly invited me to Santa Clara Feast Days and last summer she demonstrated her pottery creating technique at the Oldest House Indian Shop for collectors during Indian Market weekend.”