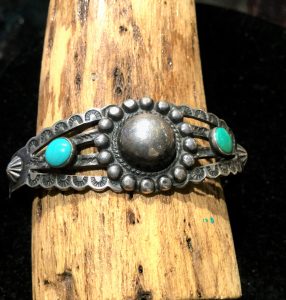 Although he entered New Mexico 135 years ago, Fred Harvey’s influence remains, as the demand his company created for Native American art and Southwest tourism continue to thrive.

The first cultural tourists of the Victorian Era and the early 1900s embraced the Fred Harvey Company’s innovations in travel, dining, merchandising and tourism and, of course, the Harvey House. New Mexico’s 13 different Harvey accommodations offered comfort and civilization while traveling by train, as well as cultural expeditions and experiences unique to the Southwest.

One such experience was the Indian Building at the company’s Alvarado Hotel in Albuquerque built in 1902. According to the website newmexicohistory.org, the Indian Building, a museum and sales room, was devised to “expose and educate the traveler to the uniqueness of handmade Indian crafts,” as well as to sell the merchandise. Herman Schweizer, who managed the Indian Building and traveled Indian Country to acquire the an extensive collection of Native American arts and crafts, enlisted the help of Native American artists as demonstrators of their work and salespeople at Harvey Houses throughout the Southwest.

Schweizer helped drive the direction of Native American jewelry and crafts as an industry, including silversmithing. Mexican metalsmiths brought their craft to the Navajo in the early-1800s, and by the 1890s Navajo, Hopi and Zuni artists had developed their own styles of silverwork. At that time virtually all Native American silverwork was made for Native Americans, says Rick Smith of the Oldest House Indian Shop.

That changed when the Fred Harvey Company entered the picture. In 1899, the company began supplying turquoise stones and silver to trading posts in New Mexico and specifying the type and weight of jewelry needed for the tourist trade.The company purchased the crafts from the artists and sold these bracelets, rings and beads often called “Harvey House jewelry” or “workshop jewelry” on the trains over the Santa Fe line, at Harvey Houses, and at the Indian Building.

Silver jewelry made in the last years of the 1800s and the first years of the 1900s is characterized by heavy stamp work and frequently featured arrows and symbols introduced or required by traders as “typically Indian” designs, most likely due to the influence of Schweizer and the tourist trade.

In a nod to Fred Harvey’s legacy and the original Native American craftspeople, the Oldest House Indian Shop offers the Indian Shop Legacy Collection. Inspired by the Harvey House jewelry created for sale during that nostalgic golden era of train travel to the exotic Southwest, many of the stamps used have been hand made in order to replicate the jewelry of that time.