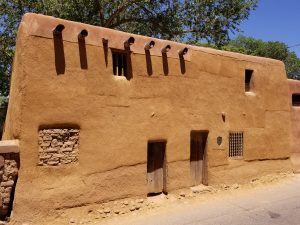 The city of Santa Fe was founded around 1610 by Spanish colonists, but its history as community of prehistoric peoples is thought to be have begun as far back as 1050 to 1150. Excavations by the New Mexico Office of Archeological Studies in the area of the Santa Fe Community Convention Center have revealed evidence of an early village that appears to have been occupied from the late 1200s until the first half of the 1400s. Prehistoric pit structures that may have been homes or ceremonial chambers are evident there.

When the Spanish arrived around 1610, they were accompanied by Tlaxcalans, a group of people native to an area east of Mexico City who helped the Spanish bring down the Aztec state, according to historian Marc Simmons.

“Tlaxcalan Indians loyally served the Spanish government and church,” Simmons wrote. “In the latter 1500s, many of them were recruited as colonists on Mexico’s dangerous northern frontier. After their arrival in New Mexico, the Tlaxcalans congregated in their own barrio, or neighborhood, at Santa Fe. It was called, and is today still known as, the Barrio de Analco.”

The Oldest House is part of that barrio. Analco means “on the other side of the water,” in the Tlaxcalan’s Nahuatl language. The name was fitting as the Indian suburb sat across the Rio de Santa Fe from the Spanish settlement with its plaza and Palace of the Governors. The Franciscan friars who joined in the settlement activities of Spain built an adobe mission in the neighborhood for the Tlaxcalans, the site of San Miguel Chapel that sits across from the Oldest House.

The Barrio de Analco was the first section of Santa Fe to be attacked and razed during the Pueblo Revolt of 1680. Nervous colonists taking refuge in the Plaza watched as pueblo war parties approached from the cultivated fields to the south and gutted buildings in the barrio. Eventually, “a company of armed colonists and soldiers carried battle to the Indian warriors in the Barrio de Analco and its adjacent fields,” wrote Richard Flint and Shirley Cushing Flint in an article for the New Mexico Office of the State Historian.

“In the Pueblo Revolt of 1680, the Tlaxcalans suffered along with the Spaniards,” Simmons wrote. “Their houses and San Miguel Chapel were burned by the rebels, and with the Spanish withdrawal they retreated to new homes in El Paso.”

Simmons wrote that only a few Tlaxcalans returned to Barrio de Analco to reclaim their homes during the Spanish reconquest of Santa Fe in 1692. Those that did helped place new roof over the walls of San Miguel that survived its burning in the revolt. Some remnant of the Oldest House with its thick adobe walls and corner fireplace, dirt floors and low ceiling also likely gave them a place to restart their lives.