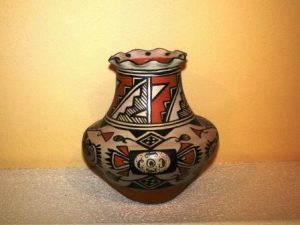 Santo Domingo artist Robert Tenorio says after more than 45 years of creating pottery, he’s still trying to keep up with his grandmother’s methods, preserving the traditional designs and passing the knowledge down the generations.

Picking up his two great-nieces from elementary school on an early release day, he planned for them to paint bowls at his house for the afternoon.  “I love to see the little stick figures they paint,” he says.

One of New Mexico’s foremost pueblo potters, Tenorio’s work was featured in 2016 on the poster and t-shirts developed by the Heard Museum in Phoenix for its “Celebrating the Art of Pottery” Indian Fair and Market.  Also in 2016, the Isleta Pueblo Arts and Crafts Fair honored him with its top award for an artist preserving traditional arts.

“I feel proud of that,” Tenorio says.  “I’m still trying my best to recreate the older styles with the traditional material.”

Using local yucca and other plant juices to make pigment and clay from around his village for his collectible pots, Tenorio features the traditional designs of his heritage.  He draws inspiration from ancient designs like the Mesa Verde steps, Mimbres animals and Kewa Pueblo (Santo Domingo) geometrical shapes.  He gives each piece his on style by exaggerating a specific design element or by combining designs from the three traditions on a single pot.

Rick Smith, owner of the Oldest House Indian Shop, says Tenorio’s work is deeply appreciated by seasoned collectors and new visitors to New Mexico alike.  “I am fascinated not just with the imagery and process Robert makes use of, but with the essential meaning and importance he brings to his work and the quiet pleasure he derives from it,” Smith says.  “He is more than an artistic designer.  He is a storyteller preserving his culture, history and beliefs.  That is what I appreciate about his work.”

Visit the Oldest House Indian Shop today at 215 East De Vargas Street in Santa Fe to see Tenorio’s work along with a diverse array of Native American and Western collectibles.