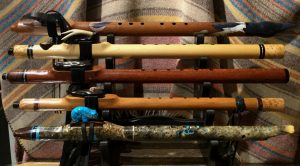 The sweet, organic tone of the Native American-style flute suggests a deep longing for something or someone distant, while the warm wood grain with leather and stone accents invite investigation in the here and now.

Kyle Smith of Oldest House Indian Shop makes it his mission to find the best sounding and best looking flutes to feature at the shop.  A professional flute player with an album of Native American flute and guitar duets to his credit, Kyle helps the experienced and the novice find their ideal flute, offering concert-quality to beginner flutes.

“We don’t choose the flute, the flute chooses us,” Kyle says.  “I spend a lot of time with our customers, not just selling them a flute, but staying with it.  I want them to enjoy it; for it to change their lives like it has for many of us.”

The flute first called to him in college while he was working in his father’s Native American and Western collectibles store.  He picked up the flute on a lark, but fell in love with it, playing up to six hours a day as he learned the intricacies of the instrument.

“A flute maker came in and told me I needed to record an album,” he says.  In 2009 he traveled to Phoenix to record Echoing Dream, Waking Visions.  He has sold 2000 copies if the CD in Santa Fe and National Parks throughout the West, and recently recorded a second album.

While following his own musical aspirations, Kyle also has been able to place the flute into the hands of many people.  From celebrities like Sammuel L. Jackson and Harry Connick, Jr. to a 98 year-old woman shopping for jewelry who saw the flute and said, “I think I can play that right now.”  And so she did.  Kyle also introducecd the flute to a stroke patient who lost dexterity in his left hand and could no longer play the guitar.  The flute  returned the music to his life and strengthened his hand.

“People are stopped in their tracks looking at Native American flutes just because of their beauty,” Kyle says.  “Some people buy them for pure aesthetics, but I want them to pick them up and play them.  They can be hesitant at first, thinking. ‘I don’t think I could play an instrument.’  But it takes very minimal breath, and there’s a flute for everyone.”

The Oldest House Indian Shop carries flutes ranging in price from $39 to $2,200 from flute makers including Odell Borg, Brent Haines, Colyn Petersen and Dan Selchow.  These passionate artists style their flutes off of the traditional Native American Flutes of the Plains and Woodlands people.  Woods used include walnut, cherry, birch, buckeye  burl, ebony and Brazilian rosewood.  Turquoise, mother of pearl, coral and shell inlay decorate the fine wood, along with leather.  The flutes, most of which are individually handmade, are accurately tuned to a specific key and play the notes of a minor pentatonic scale.

“You can play so many types of music on the Native American flute,” Kyle says.  “It doesn’t have to be Native American-style music.  I can play “Clocks” by Coldplay and “Somewhere Over The Rainbow.”