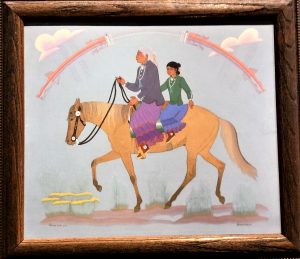 The watercolor paintings of traditional Navajo life created by renowned artist Harrison Begay bring back a time and place in Southwest Native American history in delicate and elegant detail.  His flat, graphic art depicting scenes ranging from the daily life of children and their pets to ceremonial dancers has won numerous awards and is exhibited in museums and private collections throughout the world.

Rick Smith, owner of the Oldest House Indian Shop in Santa Fe, has found Begay’s paintings to be a touchstone to the traditions, landscapes and cultures celebrated at the Oldest House.  Raised near the Navajo Reservation in Winslow, Arizona, Smith grew up with Begay’s work and the ideas and scenes he presented through it.

“I was not only very familiar with Harrison’s work, I was captivated by the subjects and the visual repository of this nostalgic period of reservation life being depicted,” Smith says.  “There is an elevated sense of affinity I have with the people and wide open spaces these memorable images bring to mind.”

Begay passed away in 2012 at the age of 95 after making his living as a painter for 65 years.  He began learning his craft in 1933 at the Santa Fe Indian School, studying under influential art teacher Dorothy Dunn, according to a biography of Begay published online by Bischoff’s Gallery.

After serving in the U.S. Army Signal Corps from 1942 to 1945, a veteran of the Normandy beachhead and other World War II campaigns in Europe, he moved to Denver to enroll in a radio technician’s school, according to a story in the Denver Post.  By 1947 he had taken up painting again and approached the Post‘s art department with his work.

“The staff recognized a big talent when it saw one,” the Post reported in 2014.  “Navajo artist Harrison Begay, 29, had arrived, all right, and he was on his way to the big time.  Begay was to become one of the most noted artists of his generation.”

The Post featured his full-color painting of a traditionally-dressed Navajo woman on a palomino horse on its March 30, 1947, cover and included additional paintings and a story on the artist in the pages of the newspaper.

Begay returned to the reservation and worked in watercolors and silkscreen, but he didn’t seem to sit still.  In the 1940s he worked on the Maisel’s Indian Trading Post mural in downtown Albuquerque, now listed on the National Register of Historic Places, and other murals.  In the 1950s he created Tewa Enterprises in Santa Fe to make and sell reproductions of his artwork and the work of other Native American artists.

Over the course of his career he earned two grand awards at the Gallup Intertribal Ceremonial and the Ordre des Palmes Académiques from the French government for his contribution to the arts in 1954.  In 2003, he won the Lifetime Achievement Award from the Southwestern Association for Indian Arts, the organizers of the annual Santa Fe Indian Market.