Skip to content
HomeCurrent NewsletterThe Oldest House: Recognized as a Cultural Icon Even in 1879 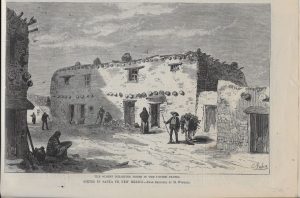 Santa Fe’s Oldest House has been of interest to lovers of history and cultural experiences dating back at least 140 years, as evidenced by a Harper’s Weekly feature on Santa Fe in its September, 13, 1879, issue.  Yes, 1879!

The article, a piece of history itself, details the story of Santa Fe and its history of governance by Spain, Mexico and the United States:  “Our readers will be interested in the sketches given on this page of Santa Fe New Mexico, which enjoys the distinction of being the oldest town within the whole territory of the United States.”

One of three sketches featured is titled. “The Oldest House in the United States.”  Signed by C. Graham, it is an image of the Oldest House viewed from the southeast.  The article discusses the Palace of the Governors and its place in New Mexico history in detail, but the image chosen to reflect Santa Fe for the readers of Harper’s Weekly is that of the Oldest House.

While New Mexico was still more than 30 years away from becoming a state, our place in the history of the United States was already enchanting lovers of adventure.  And Harper’s Weekly didn’t even go back as far as they could have, choosing to begin its story with the entry of the Spanish in 1542.

“We have a fascinating community history spanning eight centuries,” Smith says.  “We are proud of that and love combining it with the timeless treasures created in the spirit of the cultures of Santa Fe, New Mexico and the Southwest.  They are things that spark the imagination and encourage curiosity and exploration.  Here at the Oldest House we provide a venue for the joy of being in Santa Fe.”