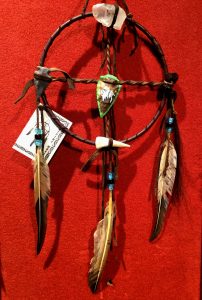 Used in health, healing and spirituality, the Native American Medicine Wheel is a symbol embraced by numerous tribes for generations. The Wheel can take many forms including artwork like an artifact or painting or a physical construction built to cover space on land.

Jamie K. Oxendine of the Lumbee Tribe of North Carolina, editor of PowWows.com and director of the Black Swamp InterTribal Foundation, writes on PowWows.com that the symbolism and the name of the Medicine Wheel vary greatly among Native people, but its physical characteristics share a common structure.

“The main characteristic design of the Native American Medicine Wheel is the most basic yet most perfect form – the circle,” Oxendine says. “This is one absolute not only in Native America for sacred hoops but also for most cultures that have some kind of Circle of Life symbol.”

Added to the circle are two intersecting lines that create a cross in the center, separating the circle into four equal sectors. But there’s more to imagine.

“The Medicine Wheel must be thought of as floating in space and its cardinal points as well as other points that cannot be seen create a perfect sphere,” Oxendine says. “Thus creating other points for directions up and down and of course perfect center.”

Added to the sectors are the symbols of color, which can also vary widely. The most common colors of the Medicine Wheel are red, yellow, black and white. Blue, purple and green are used by some tribes instead of black, Oxendine says.

The four points on the circle and the four sectors can represent many different things and ideas, including the four directions, four seasons, four stages of life, four times of day, four elements of life and more.

“It is widely accepted that the Medicine Wheel is a symbol the Circle of Life,” Oxendine says. “There can many reasons behind the meaning of the circle itself among Nations… It should be stressed that this is not the same from Nation to Nation and there can be some representation that is very secret.”

Native Voices: Native Peoples’ Concepts of Health and Illness, an exhibition by the U.S. National Library of Medicine and the National Institutes of Health, demonstrates how Native peoples today enhance their wellness through both traditional and Western healing practices.

“Ceremony is an essential part of traditional Native healing,” according to the Native Voices exhibition. “Because physical and spiritual health are intimately connected, body and spirit must heal together. Traditional healing ceremonies promote wellness by reflecting Native conceptions of Spirit, Creator, and the Universe. They can include prayer, chants, drumming, songs, stories, and the use of a variety of sacred objects.

“The Medicine Wheel, sometimes known as the Sacred Hoop, has been used by generations of various Native American tribes for health and healing.”

Discover more about this fascinating Native symbol at the Oldest House Indian Shop at 215 East De Vargas St. or online at www.oldesthouseindianshop.com. Reach the shop by phone at 505-988-2488.