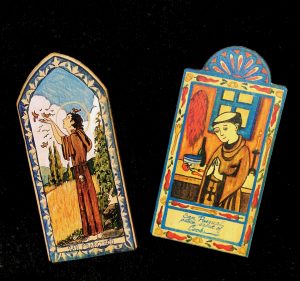 As a single mom of a 3-year old with no extra money for Christmas presents, Garlick took her training in landscape and portrait painting and began to create Christmas ornament-sized paintings of Christmas saints.  She sold the hand-painted ornaments at a local Christmas craft fair.

“They went really fast,” the Taos, NM, artisi says.  “Since then they’ve had a life of their own.”

From those craft fairs 27 years ago, grew Lynn Garlick Retablos.  After her initial success, Garlick decided there must be a more efficient way to produce her images.  A friend showed her an Italian altar screen made in medieval Europe in which an image was decoupaged onto board.  She adopted the age-old technique, creating a high-quality print from her original design and decoupaging it onto pine and birch boards, creating affordable retablo pieces in a wide variety of sizes from plaque- to pocket-sized.

As she  researched the art of iconography and retablos, she saw a responsibility to create her art with honest prayer and energy.  “I felt a responsibility to make the painting a prayer for healing, kindness and right thought,” she says.  She also saw how deeply many people responded to the images of the saints and heard their stories of how saints had blessed their lives.

“I hear so many stories from people:  it’s very touching,” she says.

She laughs recalling her son at 16 losing his car keys.  “I told him to ask for San Antonio’s help,” she says.  He headed off, annoyed and unconvinced that the saint invoked for help finding lost objects might assist.  Then he returned, shaken.  “Mom, that’s really creepy,” he said.  “I told San Antonio, ‘I don’t believe in you.'”  Then he stepped back onto a magazine laying on his floor and felt his keys under the magazine and under foot.

On the back of each of her retablos she places the story of the saint’s life and often a prayer.  She describes the simple, almost primitive images, as “coming from a more humble place.”

“They tell me what they want to be, they don’t belong to me,” she says.

Garlick started making her pocket-sized saints when her son turned 18.  “I told him we could go anywhere in the world and he chose Japan,” she says.  “That’s a long flight so I made a saint pack to carry to keep the plane in the air.  That was the start of my pocket saints.”  Now there are pocket saints, angels and blessings across the country and they have become her most popular offering.

Now her son is grown, and she’s at a new stage in life.  “The focus becomes more internal,” she says.  “There’s a deepening of the soul that I’m thinking of now.  The saints, angels and prayers have changed and blessed my life.  My hope is that they touch and bless others as well.”